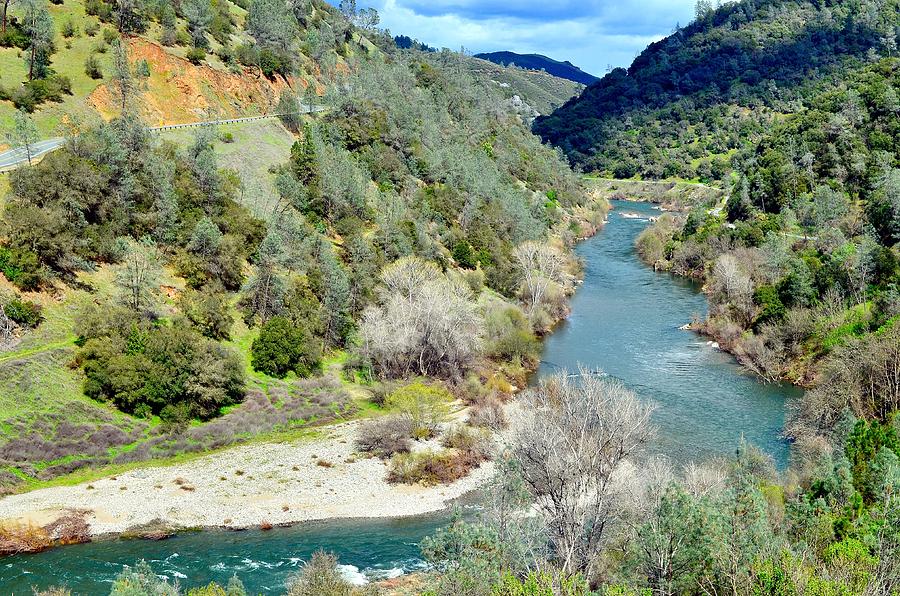 Last week we had our virtual coffee date on the top of a mountain, this week I felt like having coffee by the river. Are you up for a coffee by the river? The photo above is from the north Fork of The American River, in northern California. Even though I’m not there physically right now (I’m in Las Vegas,) I’m fairly sure you don’t have to worry about it being too cold. Would you like some coffee? Or maybe tea?

When we lived close to the river in the photo, our 80 acres was right by Eldorado National Forest, and it was possible to ride your horse all the way up to Lake Tahoe. I saw black bears most every day. There was mountain lions in the forest. The abundance of edible plants, berries, fruits, and mushrooms in the Sierra Nevada’s was like nothing I’ve ever experienced before. It was extremely appealing at the time, and I did a lot of exploring with my favorite horse Trigger. Actually all the way up until I was 7 months pregnant. The photo is of Trigger, and a very pregnant me, in Eldorado National Forest.

I’m not exactly sure what kind of horse Trigger was ( I found him emaciated tied up behind a trailer, with his tongue almost completely cut off in the middle.) My best guess is that he was a Quarter/Mustang Cross. Or maybe just mustang? Anyways, he was pure awesomeness. Trigger was sure footed, and had an exceptionally smooth gait.

Most people that I met in Gold Country, was laid back, and hard working at the same time. They had some kind of day job, but their life was at home. Home was usually by the end of a backroad, maybe several back roads. Their was no trespassing sign on every fence, and don’t thread on me flags everywhere. It might sound hostile, but it didn’t feel like that. It was more like people had integrity, they wanted respect, and they respected your space as well. I kind of liked it. It had similarities with the little mountain town I grew up next to, in northern Sweden. If you had to run into Sacramento, the nearest big city (usually a once a month thing,) and got delayed, you could call the local feed store and ask them to drop off a bale of hay in your horse pasture, and you knew that they would. Shaped by the beautiful, and somewhat harsh landscape, and a shared sense of survival?

How is your coffee? Do you need a refill? How is your week so far? What’s the weather like? The extreme cold chills that part of the country is experiencing are scary. I hope that you’re staying warm. Speaking of weather, I’m sure spring feels very far away for some of my friends, but I’ve started to go through my collection of heirloom seeds this week. In 2-3 weeks time we could realistically have perfect temperatures for starting some seeds here in southern Nevada. I will most likely do a smaller garden this year. I’ve ordered two very small green houses earlier this week, basically like two bookshelves, to start seedlings in. When they are bigger, I’m going to plant them in pots, that I’ll spread out along the fence line of the backyard. It’s kind of sad to not have a big garden and my own space, but I’m happy to be able to do some gardening. Even if it’s on a much smaller scale. I see it as a temporary setback, benefitting the bigger picture. I’m going to make the most out of it. Do you have any plans for a garden this year?

What’s going on in your universe? Any fun plans for the weekend? Thanks for enjoying some coffee by the river with me. Feel free to grab a refill 🙂

It’s all about experiences, and the healing power of nature. Life is about choosing happiness. I entered the magic world of photography when I was five years old. My gypsy soul have taken me to many different countries, and definitely taught me to be more humble. I believe that you are what you eat, body and soul. I enjoy growing my own food, and spending time outdoors. A Sagittarius loves to travel, have an open mind and, and a philosophical view. It motivates them to wander around the world in search of the meaning of life. Sagittarius is extrovert, optimistic and enthusiastic, and likes changes. A lot of that perfectly describes me. The fact that my ancestors, on both parents sides, were vikings, doesn’t exactly lessen my desire to explore. Maybe a slightly more mindful exploring, compared to the average viking. My blog, and my art prints is a results of my (inner and outer) explorations. Love, Maria View more posts

22 thoughts on “Weekend Coffee Share – Coffee By The River”

This site uses Akismet to reduce spam. Learn how your comment data is processed.